The color and variety of plant life throughout Thailand is always a treat while traveling through the Land of Smiles. The picture above was taken on the upper level of Wat Khao Sukim on the way into Chantaburi Province.

At home here it's commonly known as "crown of thorns", a part of the Spurge family (the Christmas flower poinsettia is part of the same family) and while the blossoms are stunning the thorny stems are truly nasty. I suppose if people were in the habit of picking flowers in your yard, this would be something you'd want around the edges.


For those of you who aren't horticulturalists, Euphorbus was the Greek physician of King Juba II of Numidia (present day Algeria) between 50BC to 19AD, and Millius refers to Baron Milius, who introduced the species into France in 1821. Eventually it made its way to Asia. Christians believe it may have been the crown of thorns used during the crucifixion. 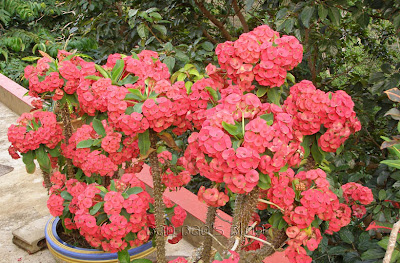 You're likely to see these as potted plants in home gardens, but in the ground they can become shrubs that can grow to nearly six feet high. They're also part of the family of plants that contains the cassava that grows throughout Thailand, too.  It's what tapioca is made from.

There. That's your agricultural lesson for the day... and no, it won't be on the final.

Posted by khunbaobao at 9:56 AM

I have to say your plant knowledge and writing has come a long way in these few years Bao-Bao. I love these shots.

The flower colours are so vivid and the petals don't look at all fragile.

An additional note for you: The family group Spurge is from Middle English / Old French espurge (to purge) due to the use of the plants sapo as a purgative.

The entire genus of Euphorbia is one of the largest. It has approximately 2008 species. They range from the floral you see in your shots, to cacti and then the non throny and beatiful succulants.

Have a great day and keep up the good work.

I don't comment every day but I look every day.

Thanks, Keith. Some of them I know, and some I have to do some research on.

You've been a big help with some of the "mystery blooms" yourself!