OK, I guess the "break's" about over: I'm back from a stay in Hawaii. For a lot of you that probably conjures up images of beaches, umbrella drinks and lazy days, but this trip was to inter a family member's ashes and begin clearing their houseful of possessions - a good 65 years' worth. We put a very small dent in the total.

I learned that muggy and dusty don't play well together. I'd like to call it a fine patina of history you accumulate on your damp skin, but in truth it's just a layer of grime that makes a tepid shower a treat at least a couple of times a day. Like Thailand, but in this case not merely to cool off or get yourself "freshy," as a Thai friend likes to call it.

It was fun, though, in an odd sort of way - and I freely admit to be an odd sort of person.  The three of us going through things laughed a lot, and caught ourselves smiling over and over again when we'd come across something that sparked a happy memory... which is the best sort of memorial service any of us left behind can offer up, I think! The local UPS shop may send a Christmas card this year after processing about relatively weighty 20 cases of memorabilia and family history for shipment home here; I think I doubled their total week's income.

That said, I found myself going back to the folder of "Smiles" photos a day or two ago simply as a pick-me-up now that the dust has settled, figuratively and literally. It's been a little over three months since we've added to the series, so here are a few more from the archives: 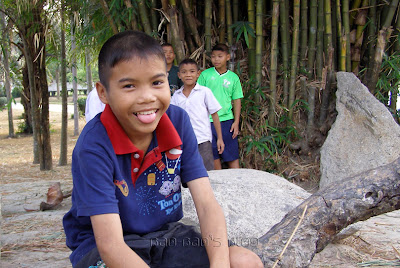 The kid above was one at an orphanage I'd visited in support of a charity. It was lunchtime when we arrived there, but before we'd left the boys had put their plates away and were enjoying their free time. For a variety of reasons the girls are in their own area on the grounds. Visitors are a novelty - you can't simply show up; clearance and supervision are wisely required - and farang visitors are even less common. That adds to the novelty factor, and the kids are always ready to mug for the camera. 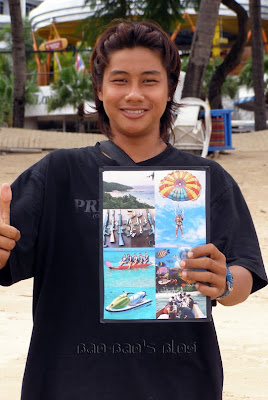 This guy was working along Beach Road in Pattaya one morning, trying to get tourists to allow him to set them up with activities for the morning or day. Anyone who's done door-to-door sales (or worse, "cold calling" phone sales) can appreciate him relating how when he gives his pitch he gets turned down a hundred times a day. I made it 101, but he smiled for the photo anyway.


It was lunchtime on an unusually hot day in Bangkok when I took the picture of the two men playing checkers on the sidewalk in front of Pantip Plaza.

The one in the athletic t-shirt (known to some here in the U.S. as "wife beaters", but forgive me for starting in on something that would take too much time to explain) saw me standing and watching and actually thought I might be of some assistance. He made a move, but kept his finger on the piece while glancing up for my approval. Not wanting to butt in I just shrugged my shoulders. As he finalized the move and the man in blue took advantage of his mistake the one in the tee looked up again, shrugged his shoulders and I caught the smile.


The last image today is of a group of students I met at Doi Suthep, high on the hillside above Chiang Mai. There's no story behind it, but it's one of those pictures that makes me smile, so I'm sharing it with you.

What? Taking ANOTHER Break? 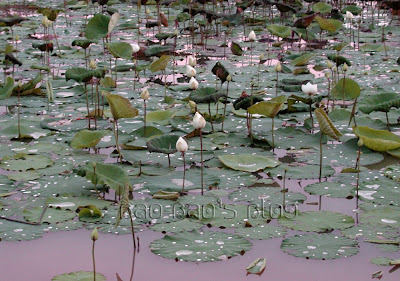 I like oatmeal - providing it isn't cooked until it's slime - but if life isn't a box of chocolates you could liken it to a bowl of oatmeal, and that inevitably means some lumps.

A couple of weeks ago a woman who's been a second mother to me passed away after what was - in reality - a short illness. Since then, I've had a friend of more than 20 years die in his sleep of cardiac arrest, another told he has stage four pancreatic cancer, another who lost his father suddenly, and yet another awaits test results for probable liver cancer.

That means I'm going to be on the road and away from the blog for a week or so. There are memorials and interments to attend, folks to grieve with, hugs to be shared and hands to be held.

Back in a while.


As weeks go, the island of Koh Samet (or Samed, if you prefer... I flip-flop on some transliterations) hasn't had a very good one. The story goes that PTT Global Chemical was pumping crude oil from an offshore drilling platform to a container ship when a leak in the piping allowed somewhere between 50,000 liters (according to PTT) up to 100,000 liters (according to some environmental groups) of crude oil into the Gulf of Thailand, forming a thick layer of gunk on the relatively pristine water of Phrao Bay, on the Western side of the island.

On the map below I've added an insert that shows a little detail of where the spill occurred and came ashore at Ao Phrao. In the main map most of Koh Samet is covered by "Khao Yaem La - Mu Ko Samet", which is the national park whose boundaries cover a large part of the central area and Eastern side of the island. 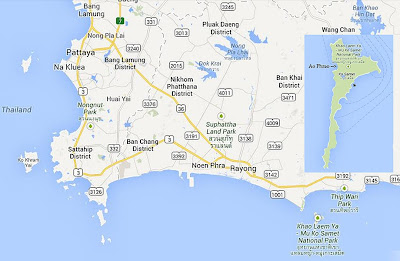 I recently stayed on the Eastern side of Samet, on the beach at Ao Phai (near the asterisk on the inset map) so when the news began to leak - pardon the weak pun - I was concerned that the beautiful spot I'd visited was now awash in thick, sticky crude oil. Thankfully that was not the case, and I'll post about that resort soon.


While the lion's share of tourists vacation on the long stretch of beaches on the Eastern shore, the Western shore is home to some of the more pricey resorts, and I'm sure they're hurting now. Estimates are that it may be up to a year before the mess is truly cleaned up, and although PTTGC has said they'll make good on losses to the fishing and tourist industries, I tend to doubt that's really going to happen.

PTTGC has said they'll cover any damages over their $50 million in insurance coverage, but that remains to be seen, of course. Any of you who've had to deal with insurance companies know that their prime marching orders are to make you put in claim(s) multiple times, reduce any amounts claimed as often as they can and make any payments they're cornered into making for as long as possible. While the corporate resorts may do OK, many of the smaller interests will suffer. That's a sure bet.

The latest news I've read is that the island is essentially shut down at this point; the regular-as-clockwork (or as regular as anything on Thai time can be) ferries and other boats to and from the main pier of Ban Phe have stopped running and most of the people who don't actually live on the island have been evacuated.


With the oil slick now moving up over the Northern end of the island and heading toward the mainland - Koh Pla Teen, Koh Kudee and Koh Kham seem to be the "guesstimated" targets for it to hit land. Unfortunately there are important coral reefs in its path, and there's great danger of harming or destroying the delicate life there. Let's hope the damage is as minimal as possible.

Posted by khunbaobao at 10:46 AM No comments: