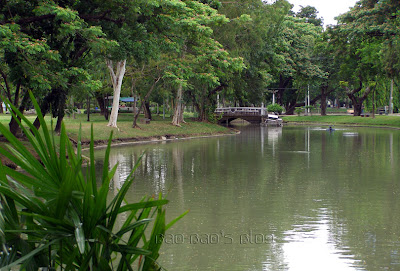 It takes a lot of water (and labor) to keep Lumphini Park the lush, green expanse it's been for so many years, but what a worthwhile use of time and effort it is; a joy for both residents and visitors alike.

Much of the water is pumped from the lake in the park itself, but evaporation must play a part in the overall consumption of water for over 140 acres (57.6-hectare or 360 Thai rai). I couldn't find figures or estimates on how much water is used to keep the place up annually, sorry to say.  I know what my own water bills run to keep ponds maintained and yard(s) watered, so I'm guessing it's a huge quantity.


The history and details of this magnificent park are available in the post "Lumphini Park: Bangkok's Emerald Oasis" from May of last year, so there's no need to go through that again - but a couple of months ago I took a couple of walks and covered most of the mile and a half (2.5Km) of paved walkways. It was still relatively cool at 09:00, and the sprinklers and hand-watering were going on in earnest.


Although it was an informal count I saw somewhere in the neighborhood of 30 people working on the grounds one morning walk, most all of them watering before the temperature rose by early afternoon.


If the overhead electrical and phone wiring visible throughout the city is any indication, the sprinkler system must be a massive ball of snakes. Over the years the additions, replacements and re-workings have undoubtedly become a mess.  Here in the USA I'd tend to call that "the curse of the lowest bidder," but there it probably had more to do with - oh, let's just say favoritism, to avoid any unsavory allegations.


Although I know it's not likely it seemed as though there was a foot of heavy-gauged commercial grade hose for every foot of pathway; all being dragged along by someone invariably protected from the sun by a long-sleeved work uniform and broad-brimmed hat. 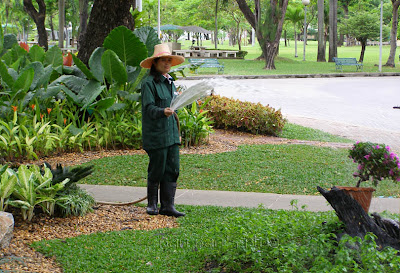 The areas that had less delicate plant specimens and were closer to the paved walkways were taken care of by water trucks. Moving slowly along, they'd pause as a worker would open the valve, sending a wide, vertical fan of water spraying out from one side of the vehicle or the other. 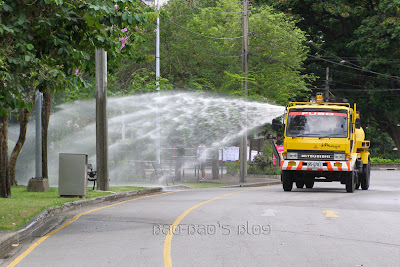 Although they were looking to see if there were pedestrians where they intended to douse an area they do miss, sometimes. At one point, as the spray blasted from the truck into a line of hedges I heard a surprised shout from the hidden side. A young man came running into view, his clothes now soaked and clinging to him.

Luckily he was wearing a tee shirt and running shorts. After a brief but seemingly civil exchange between the driver and the young man the guy shook himself rather like a dog would do after a bath and they laughed. 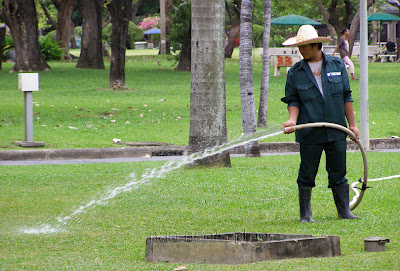 That same morning I thought I was going to see another person get soaked, but this one would have to have been something more than accidental.  You remember the man sleeping in the photo earlier in the post today?  This is what was happening nearby: 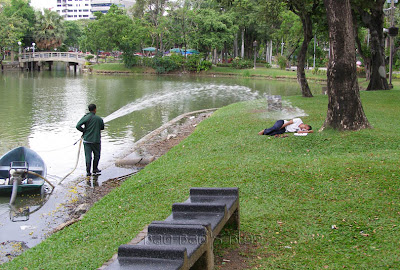 He didn't move at all as the gardener splashed around him, so either he was really a sound sleeper or a very trusting soul.

It's forecast to be near 90F/32C where I am today, so I suppose I ought to go check the smaller container plants and make sure there's no watering I need to do myself this morning.

Given the choice, I'd rather be snoozing on that lake bank in Lumphini Park, but so it goes.
Posted by khunbaobao at 9:30 AM